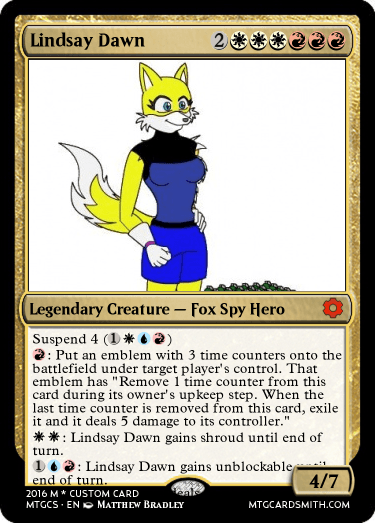 Suspend 4 ({1}{w}{u}{r})
{r}: Put an emblem with 3 time counters onto the battlefield under target player's control. That emblem has "Remove 1 time counter from this card during its owner's upkeep step. When the last time counter is removed from this card, exile it and it deals 5 damage to its controller."
{w}{w}: Lindsay Dawn gains shroud until end of turn.
{1}{u}{r}: Lindsay Dawn gains unblockable until end of turn.
When Lindsay Dawn deals combat damage to a player, that player must sacrifice a number of permanents and/or discard cards from his/her hand equal to the combat damage that would be dealt. Then prevent an amount of combat damage equal to the total number of permanents sacrificed and cards discarded.

Support Luigifan's creations
with a gift of Premium Membership!