It's 2009, I'm sitting on the floor of a neighbor's house slamming down a Giant Growth onto my Sage Owl and having a blast doing it. I had just gotten my first taste of Magic a couple months back at NYCC where I picked up my first deck, the Unstable Terrain deck from Zendikar. It wasn't exactly powerful, certainly not competitive, and had only single copies of it's most powerful cards. And yet I always come back to this deck because it was fun. It wasn't consistent but every time I used it I had a great time. This deck is what first ignited my love for kitchen table Magic and the fun that can be had not by playing the best decks or cards, but by playing something new, something that barely works.

For those of you out there who don't know, kitchen table Magic is the most casual of casual formats, in fact I don't think it can rightfully be called a format. The basic rules of Magic remain the same. The main difference from your average Magic match lies in the end goal of the game. In a game of KT the goal is to have the most fun possible from the duel while actual victory takes a backseat. The best game of Magic I ever played was a two hour match between my KT control deck and a friend's Death and Taxes deck. Obviously I lost but neither of us had ever laughed so hard.

This super casual approach to Magic can be difficult for people who are serious players. Some of my friends on the competitive level have actually started to lose interest in the game because even though they don't want to keep spending money on new decks for standard, or they've become bored with the relatively unchanging modern meta, they've become so hardwired for competitive play that it's nigh impossible for them to just sit back and play casual again. KT Magic is as far from competitive as it gets and for players who are hardwired for tournament level play I think the secret to enjoying casual play lies in the deckbuilding being used as a gateway to enjoyable gameplay.

At heart I've always been a brewer, I like making my own versions of archetypes or creating entirely new combos. KT is the best type of deckbuilding experience for people who want to try out some crazy new idea in a place where it won't just get batted aside by optimized decks. KT is all about that spark of wild imagination. It's searching through bulk rares, it's asking yourself why no one's ever thought of making a coin flipping deck, it's building around absurd win conditions that have no viability outside of such a casual format. Honestly if you're a brewer and you know other people who like making new decks than there's no reason you guys shouldn't be playing KT right now.

Now that I've raved about it I have to admit that KT has one big issue. Mainly since it's such a casual format it doesn't have a ban list. This means that technically you could play Storm or Birthing Pod decks in KT to just sweep all of the more casual decks aside. My proposed solution to this is that as a playgroup set your own banlist for KT. These sort of specific ban lists let you set the level of casual play you want to have within your own group. And doing this can even allow you to ban a card only in a specific build. Instead of banning specific cards you could even ban decklists. Now a downside to the group specific ban approach is that it'll make it difficult to play with others outside of your playgroup, to that extent I've actually been working on an out of playgroup ban list. Hopefully this goes the way of EDH and gets enough attention for people to see this. However this banlist will only apply to spontaneous matches outside of your playgroup. As long as everyone in a game agrees on the legality of cards or decks I actually encourage you to ignore the ban list in favor of personal preference of the players present.

Hopefully this has turned on the brewing switches in some of your minds. If you've never tried kitchen table Magic do it. Get off your computer and go deep diving through your collection. Even if you have played KT before now's a great time to turn the way a lot of us started playing into a genuine way to enjoy this beautiful game. A quick first of two endnotes; it should go without saying but one of the things that this format hinges on is good sportsmanship. This format seeks to avoid getting to such levels of optimization that the meta becomes static. Part of this format being self policing relies on it's players not making decks that seek to just win. All in all just don't abuse the openness of this format to crush naive players who are seeking a fun game with your fully tricked out Tron deck. Remember that the goal here is to have fun, not add to your win/loss ratio. See the suggested out of playgroup when it's posted for cards and decklists to maybe not use in an effort to keep KT accessible to new players. The second little note is that you shouldn't seek out cards for a KT deck. If you're at your local game store I'd say go through their bulk if they have it but try to spend as little money as possible and work with what you have as much as possible.

To help everyone along the way I have included below my personal favorite Kitchen Table deck I've ever played. You'll notice it has no sideboard because honestly if everything goes correctly your decks shouldn't need them. It also only costs about 18 dollars as of the writing of this article. 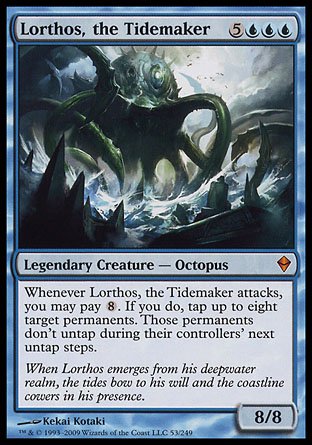 Thanks for reading, please feel free to write to me at East2WestMTG@gmail.com with ideas and things to write about in the next issue of Coast to Coast Casual. See you all then.

East2West is an aspiring writer from NJ currently seeking fame and fortune on the internet. She's been playing Magic since Zendikar block (the original one) and is a commander player with one deck for each two color pair and one for each single color. The only non EDH deck she plays is her own personal Pauper brew, Pauper Eggs. Follow her on her newly created and probably soon to be underused twitter @East2WestMTG.