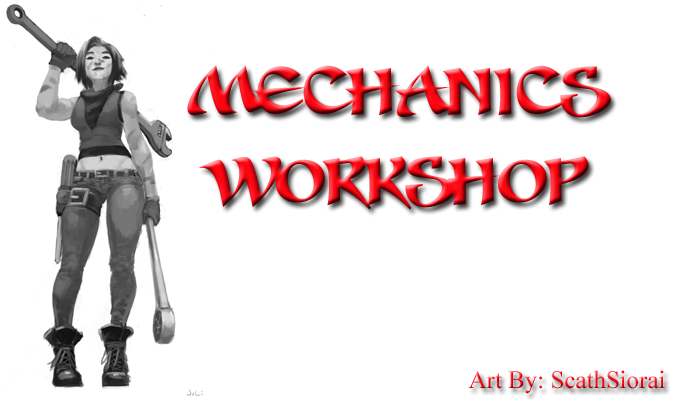 Keyword abilities, one of the oldest mechanics in all of magic. Alpha first introduced us to such favorites as flying, trample, first strike, and many more. Most of these would go on to be the basic defining evergreen keywords, the abilities that help define and shape the identity of colors and cards.But evergreen isnât what Iâm here to talk about today. When I sit down to make a set the first thing I do is write up a basic concept of the lore and world. Then, and most important for today, I start brainstorming up mechanics to fit that world and itâs lore. This process is what I want to talk about today. Letâs discuss how to make mechanics for our custom sets and cards.

Iâve chosen five mechanics that I created over the course of my Cardsmithing career and Iâll go into what went right and wrong with each one, hopefully so you donât have to repeat my mistakes to learn the same lessons. Letâs start with the oldest of the fiveâ¦ 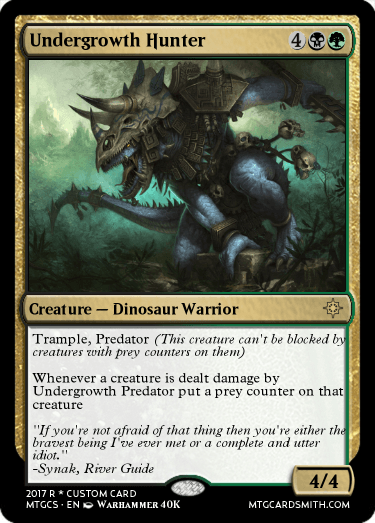 The first card I made with Predator is from 2017, I was still finding my way as a creator and CCC wasnât even a concept yet. The mechanic as a whole was inspired by Tetzimoc, Primal Death, a mostly forgotten legendary from Rivals of Ixalan. Tetzimoc has a unique ability that allows you to place Prey counters on creatures while in your hand and then destroy them upon entering play. To date Tetzimoc is the only card ever printed to refer to Prey counters. I created Predator as a means of interacting with Prey counters because I found them interesting. Similar to how Bounty counters, first introduced in 1997 have gotten more support in Commander 2019 and Ikoria. I wanted to highlight Predator because it shows one of the best places to draw inspiration for your mechanics, cards that have a unique and underutilized ability. There are hundreds of cards that hint at mechanics or ideas but never follow through. They are the perfect wellsprings of inspiration for us as Cardsmiths. I recommend using Scryfallâs random button to help find some next time youâre in need. 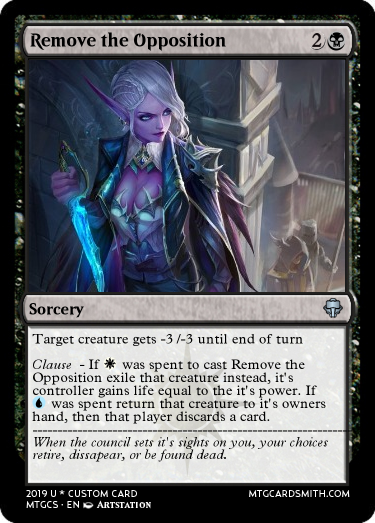 In contrast to the simple and effective Predator, Clause is a forkingÂ mess. The mechanic is based on cards like Batwing Brume from Lorwyn and I am not ashamed to admit I completely failed. Clause is not only extremely confusing but also poorly developed on my part. First off it forces you to make cards that have only one colorless in their mana cost if used on monocolor cards unless you want to face the question of âWhat if both colors are spent?â Clause as a concept is fine, thereâs a way to make it work but as it is it not only forces you as a designer into a corner but confuses your players. This is an example of not thinking through the wording of a mechanic before printing it. A good rule of thumb is to think about whether or not you would have understood it when you first started playing Magic. If the answer is no then you should try and find a way to simplify the wording.

Overlay ([Cost] - You may discard this card and pay itâs overlay cost, when you do exile this spell overlayed onto target creature.) 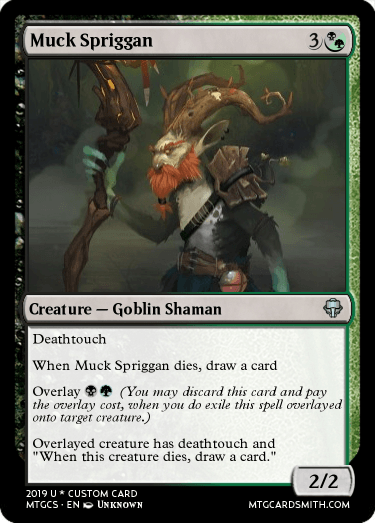 Only now that Iâm writing this do I realize that Overlay is kind of like Mutateâs weird cousin, but thatâs neither here nor there. Overlay is an example of a complicated mechanic that requires only minimal explanations. All cards with Overlay include the text âOverlayed creature has ___ â on them which helps players to understand the mechanic. Overlay was created because I had an idea that was along the lines of âWhat if bestow didnât fall of the creature?â Overlays are meant to stay on creatures even when they change zones. And that is actually where the mechanic fails. Itâs incredibly difficult to keep track of whether or not two creatures in a graveyard are Overlayed with each other. The takeaway here is that something that needs to be considered in Magic design is ease of memory. Players are not computers are will forget certain things if they are not somehow marked. Mutate solves this problem by separating the creatures once they change zones. Keep this in mind when making your mechanics, the more they require the player to remember without help, the less fun they become. 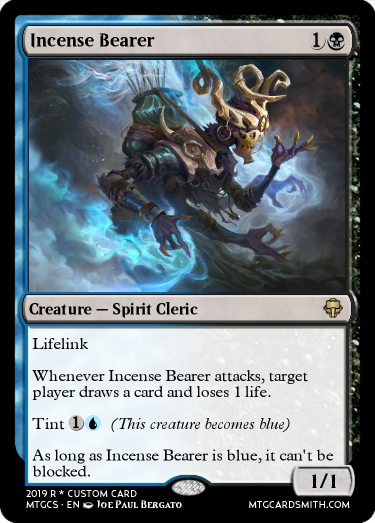 Tint might be my favorite mechanic Iâve ever made. Iâve always thought the idea of changing somethings color was underutilized in magic so I decided to make a set based on that idea called Palletia. Tint is one of the mechanics featured in that set. Creatures that have Tint have additional abilities that activate when they are certain colors, this is worded that way because other cards that change their color can be used to dodge the Tint cost. Similar to how Keyword counters are included in Ikoria boosters if Tint ever saw print Color markers would be included in boosters to help keep track of the creature's color. Tint is a simple mechanic, just one sentence, but it works. The lesson here is that mechanics should open up design space while blending with the themes of the set. Tint works not only as a mechanic but as an enhancer for the rest of the set.

Greed (Whenever this creature attacks the player who controls the most nonland permanents, put a +1/+1 counter on it.) 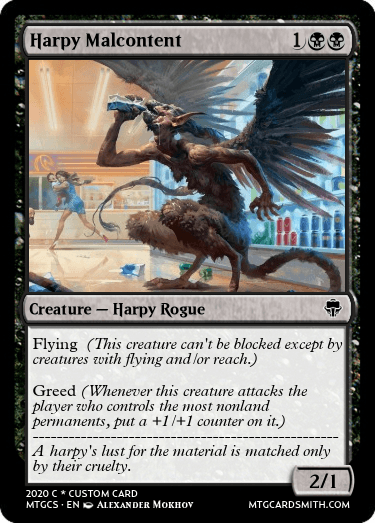 Greed is the most recent of the mechanics listed here, having created it only a few days before this article. Itâs not particularly creative or unique. Itâs not that simple but itâs not exactly complex either. You might be asking why it was included then and the answer for that is the inspiration behind it. One of the easiest ways to create a mechanic is taking an existing mechanic and tweaking a few things. Greed is the Dethrone mechanic from Conspiracy but swapping life for nonland permanents. This is one of the simplest ways to make a good mechanic and I will argue that itâs not in any way cheating. R&D does the same thing all the time actually. Shadow is basically Flying, Intimidate is just a fixed version of Fear, and Flashback, Escape, and Jump-Start are all extremely similar.

One last thing before we wrap up. There is a list of unused mechanics on the MTGwiki and it is genuinely worth your time to check it out, if for nothing more than just a look at what may have been.

I hope this article inspires you to go out and craft mechanics thatâll make R&D weep and throw job offers at your feet. Iâd love to hear your thoughts on these mechanics and any of your own custom ones in the comments below! You can find me on twitterÂ @East2WestmtgÂ or email me at East2westmtg@gmail.com. As always this has been East2West with CCC, I'll see you guys on the battlefield.