At the beginning of each end
by creepybeagle on Jul 30, 2018

At the beginning of each end
by creepybeagle on Jul 30, 2018 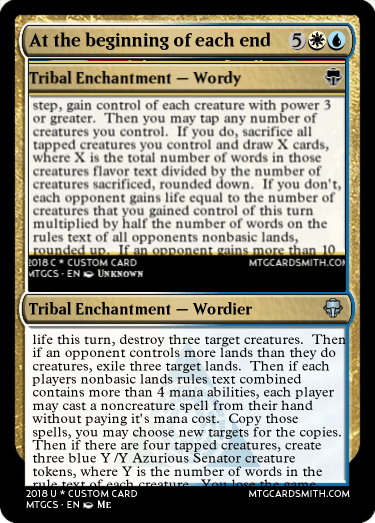 At the beginning of each end

life this turn, destroy three target creatures. Then if an opponent controls more lands than they do creatures, exile three target lands. Then if each players nonbasic lands rules text combined contains more than 4 mana abilities, each player may cast a noncreature spell from their hand without paying it's mana cost. Copy those spells, you may choose new targets for the copies. Then if there are four tapped creatures, create three blue Y/Y Azurious Senator creature tokens, where Y is the number of wor

Support creepybeagle's creations
with a gift of Premium Membership!