Bounding Brigade
by Suicidal_Deity on Oct 29, 2020

Bounding Brigade
by Suicidal_Deity on Oct 29, 2020 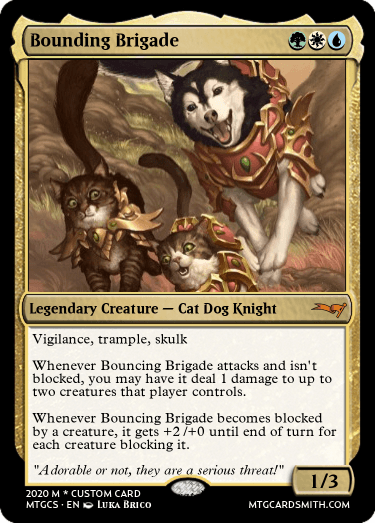 Vigilance, trample, skulk
Whenever Bouncing Brigade attacks and isn't blocked, you may have it deal 1 damage to up to
two creatures that player controls.
Whenever Bouncing Brigade becomes blocked
by a creature, it gets +2/+0 until end of turn for
each creature blocking it.
"Adorable or not, they are a serious threat!"
"I named that one Sir Scratches."
"I have never been so giddy or so terrified."
"Sir, I know they are the enemy! Even still, can I keep one?"