Selfless Violence
by Suicidal_Deity on Sep 18, 2021

Selfless Violence
by Suicidal_Deity on Sep 18, 2021 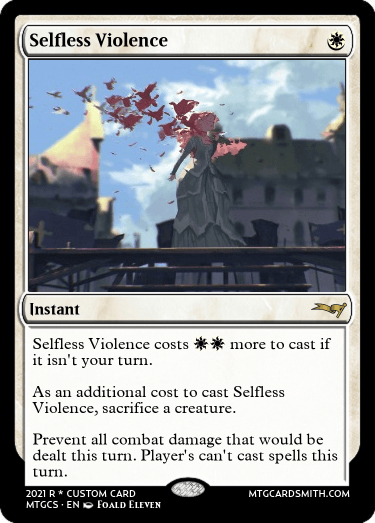 Selfless Violence costs {w}{w} more to cast if
it isn't your turn.
As an additional cost to cast Selfless Violence, sacrifice a creature.
Prevent all combat damage that would be dealt this turn. Player's can't cast spells this turn.
"One act can quell an uprising. Quiet the mob. Even end a war. Who wouldn't be honored with that task? "
- Some poor soul with visions of fairytales and an inflated sense of worth.