White-Hot Retribution
by DragonsApprentice on Jun 05, 2017

White-Hot Retribution
by DragonsApprentice on Jun 05, 2017 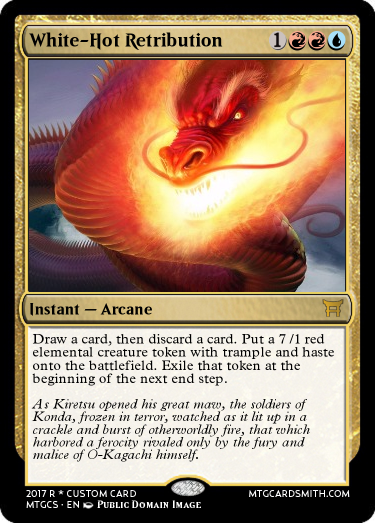 Draw a card, then discard a card. Put a 7/1 red elemental creature token with trample and haste onto the battlefield. Exile that token at the beginning of the next end step.
As Kiretsu opened his great maw, the soldiers of Konda, frozen in terror, watched as it lit up in a crackle and burst of otherworldly fire, that which harbored a ferocity rivaled only by the fury and malice of O-Kagachi himself.

Support DragonsApprentice's creations
with a gift of Premium Membership!