Magic The Gathering brings so many people together, but who knew that a coupleâs love for the game and the movie âTombstoneâ would allow the stars of the game, MTGCardsmith.com and actor Val Kilmer to align?

Well, thatâs what happened in 2019 when MTG Cardsmith user Messifan91 used the website editor to create a card honoring Kilmer and presented it to him at a âTombstoneâ event outside Austin, Texas. The moment is caught on film in the new Val Kilmer documentary, âValâ, which can be streamed on Amazon Prime Video.

The documentary is a revealing look at the actor, his career that spans four decades, his complex family life from childhood to now, and his recent struggles following his battle with throat cancer that has severely hindered his ability to talk.

At about the 53-minute mark of the film, Kilmer is seen signing autographs at the âTombstoneâ event at J. Lorraine, Texas, Ghost Town. Messifan91, or Justin, and his wife, Heather, can be seen meeting Kilmer and presenting him a Magic card. Justin explains that it is a Magic the Gathering card. MTG Cardsmith aficionados recognize this is a custom card, and Justin used MTGCardsmith.com to create it.

âOur favorite movie has always been âTombstone,ââ Justin said. âWe just loved Val as Doc (Holliday), and (we) even had our honeymoon in Arizona and got to go to Tombstone and saloon hop for a couple of days.

âThe little town was a perfect replica of an old west town and Val really mingled with the people there and was so charismatic. There was even an outdoor screening of Tombstone and Val himself introduced it and sat with the crowd to watch. Everyone was given toy cap guns to shoot into the air at certain parts during the movie. It was an absolute blast.â

Justin and Heather paid a little extra for the âMeet and Greetâ with Kilmer. Justin brought two different cards he created on MTGCardsmith.com, one for Kilmer to sign; the other as a gift to Kilmer, but the event hosts almost didnât let him through with both.

âThey were like, âSorry, Val will only sign one item per person,ââ Justin said, âand I said that one was a gift for him and they seemed pretty surprised by that.â

Kilmer is now in remission, but the movie demonstrates his struggles during treatment and now. And that goes into Justinâs process for making the card.

âAs for the inspiration behind the card itself, it mainly just made it as a testament to his battle with cancer,â Justin said. âAs an encouragement, but also as a totem of victory for him. That's why there's that win-con (win-condition) in there. I also wanted to grasp his humanity, and the importance of feeling that victory for him as a person, hence the second ability.â

Making a Magic card for Kilmer, combining their love for âTombstoneâ and Magic The Gathering brought everything full-circle for Justin and Heather.

âMy wife and I have played MTG for many years,â Justin said. âIt's one of the things that brought us together and holds strong in our relationship like glue.â

This month I want to do something I haven’t done in awhile, talk about what decks I’m actually playing! I tend to brew most of my own lists since I do primarily play casual, so whether you’re looking for some cool ideas as to what decks are out there or you just want a peek into my deck boxes, I’m proud to present my current decks!

I have eight commander decks total at the moment, with seven of them being fun but nothing to really write home about. I have two more in the works that are a bit experimental, but I’ll drop those lists when they’re finished. For now if you’re interested in them, here’s those seven below.
But the deck that I really want to highlight today, the reason I wanted to write this article, is because I finally completed a deck that’s been something of a pet project for me. Planeswalkers of all ages and demographics, let me introduce you to Turnless Obeka. What’s your favorite EDH deck you have? Let me know in the comments below!
You also can find me on Twitter @East2Westmtg or email me at East2westmtg@gmail.com.
As always I’ve been East2West, your resident Ajani fangirl and Green’s enemy color pair, and I’ll see you guys on the battlefield!
Aug 17, 2021 by East2West
Comments 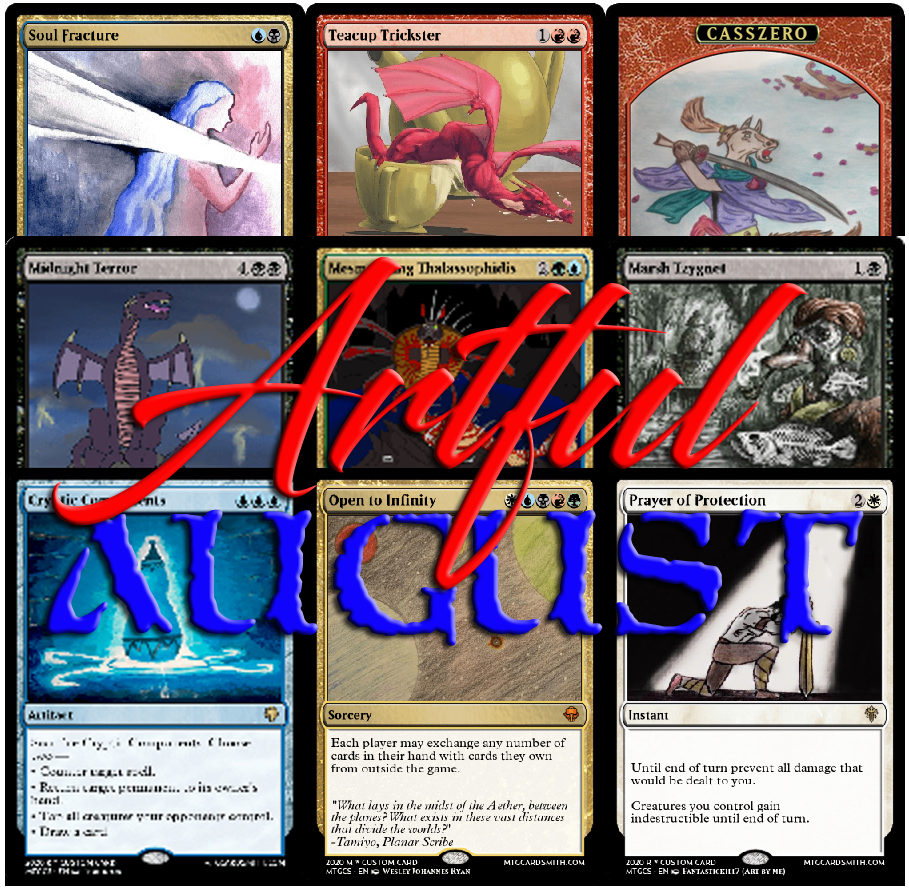 Artful August is BACK! Just in time to get you out of your doldrums!

Just like the previous three Artful August Challenges, we're looking for your Original Custom Artwork Cards to help us celebrate the month of August! Show us what you've created for this years challenge! Last year we added more prizes to give you more opportunities to win, and that hasn't changed! And just like we have in the past, we're going to dedicate the Featured Space to Custom Art cards and Featured Cardsmiths!

Where do you enter your Artful August submissions? Just click the image below and you'll be whisked away to a world where dreams come true!

Who better to feature this month than one of our resident artists, crawdadswelcome! Not only does he make wonderful art, he makes some pretty good cards as well. We've picked out a few that we think you'll like, so please check them out and slather them with favorites! 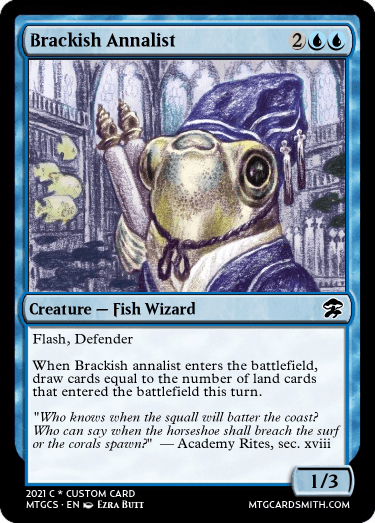 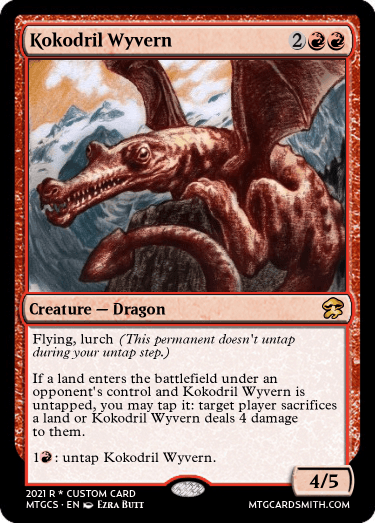 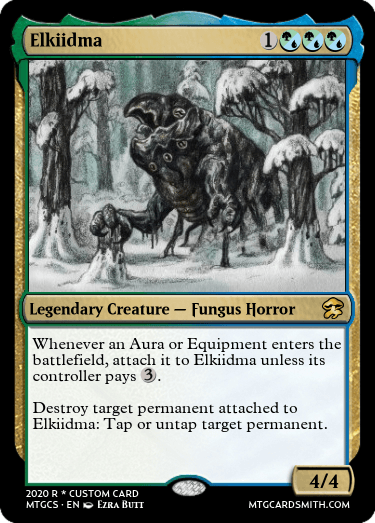 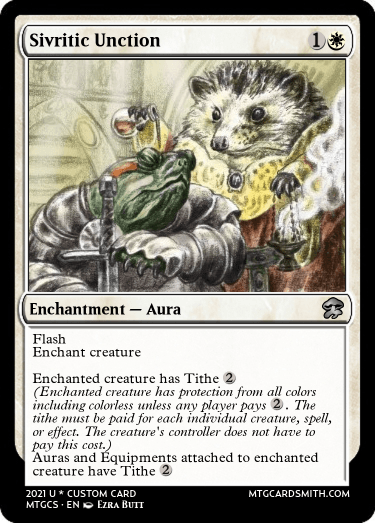 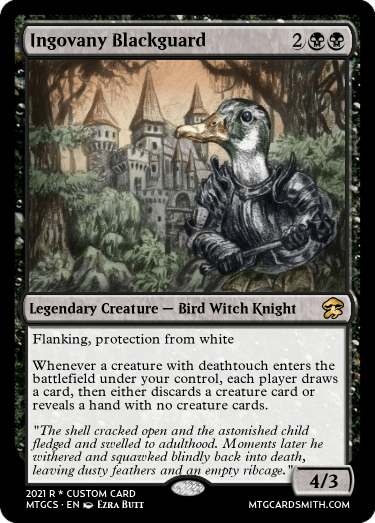 Our second Cardsmith for August is TheDukeOfPork. We love to see Cardsmiths who show passion and growth from their humble beginnings, all throughout their Cardsmith career, and TheDukeOfPork is one of those creators! We think you'll love these five cards from TheDukeOfPork as much as we do, and we're looking forward to seeing these gather a lot of new favorites! 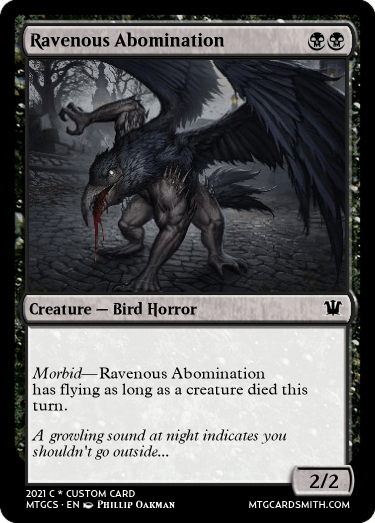 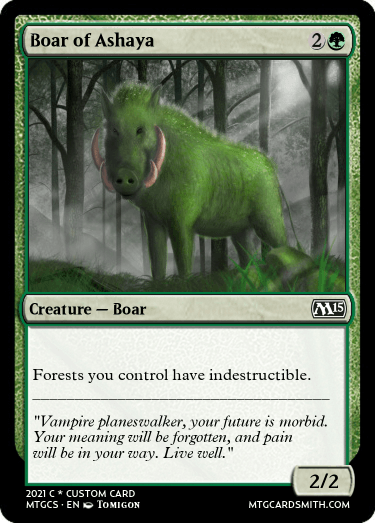 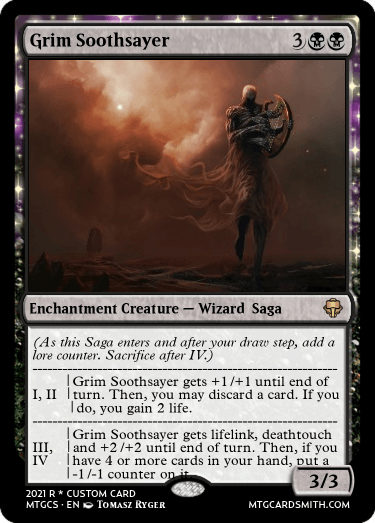 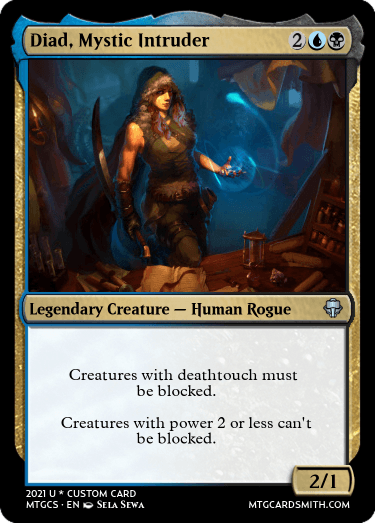 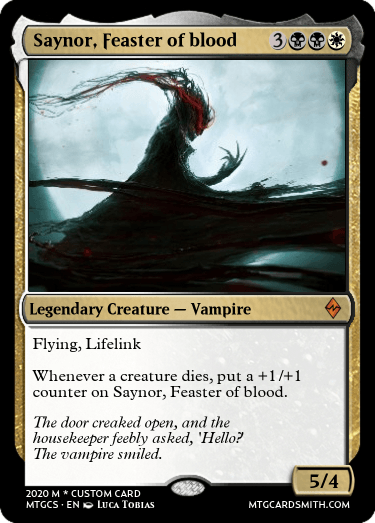 Each month we're excited to highlight just a couple of Cardsmiths that have helped make MTGCardsmith the best interactive online Card Creator. We hope you'll take some time to check out their creations!

CCC: It's Sometimes Too Easy Being Green

I believe that Green is getting too much right now. I know, controversial statements, but for once in the history of CCC I want to get fully serious and actually talk about this because it’s been worrying me as someone who really loves this game.

For a long time, Green has just been a powerful color in Magic. The nature of the color itself rewards players for just sort of doing things that you naturally need to do to win. At the most basic level Green gives you access to ramp in the form of dorks like Llanowar Elves and land tutors like Rampant Growth.

It then gives you access to payoffs from accumulating mana in the form of massive creatures like Craterhoof Behemoth. That is Green at the most basic, and even then it’s really good. When I teach people Magic I build little example decks, one for each color. The Green deck has always been tricky to put together because a lot of those basic cards are deceptively powerful when compared to what the others have to offer.

Now this basic level of Green isn’t an issue, I just want to point out why Green tends to be a powerful color anyway. To win this game you need mana and finishers, Green gives easy access to both.

Now Green has been branching out lately into the territory of other colors, and this is where problems start to crop up. Let’s look at Modern Horizons 2, the most recent set and one that features some great examples of this. Specifically, three cards stood out to a lot of players and I want to address them one by one. To me this card is the one that makes actual sense. For those that don’t know, Black actually has a card that already does this but with Swamps instead of Forests. Personally, I say just make it a cycle and leave it at that. Even if they don’t though, Green does a lot with lands anyway so I’m comfortable saying I have no issue with this and moving on. Certainly the most powerful of the three, but not the one I have the biggest issue with. Green has a history of pulling things from the graveyard with cards like Regrowth being around since Alpha. But the thing is, just because it’s something a color can do, doesn’t mean it’s something a color should do. Sure the effect makes sense, but what does it actually do for Green? It doesn’t further any of the more established Green strategies and actually seems to encourage a more Spellslinger type playstyle that makes absolutely no sense. I don’t understand why Green was given this card and honestly I wish it hadn't been printed. I don’t expect it to break the game, but a Green Yawgmoth’s Will comes off as WOTC basically admitting it’s their favorite color. This...this really annoys me. Sylvan Anthem is pretty much a strictly better Honor of the Pure/Crusade type effect, something White is well known for having in their slice of the color pie. It can be argued that this makes sense for Green, it is the color of creatures for sure, but the issue is that White has already been losing a lot of its unique effects. I’ve talked about it before but a lot of cards that could’ve been printed as White are often not, Opposition Agent is a great example of this. Green has barely any past anthem cards printed, and those that do exist are either multicolored, colorshifted, or very situational.

All in all, Green is looking more and more like the color to play and as someone who actually enjoys playing White, I’m getting really sick of this. Please just stop printing cards like this WOTC, innovation is amazing but not at the cost of the other parts of the game.
Is Green getting too much or am I just overreacting? Let me know in the comments below!
You also can find me on Twitter @East2Westmtg or email me at East2westmtg@gmail.com.
As always I’ve been East2West, your resident Ajani fangirl and Green’s enemy color pair, and I’ll see you guys on the battlefield!
Jun 18, 2021 by East2West
Comments

The Return of Summer

Fun in the Sun!

Summertime is soon to be upon us, and we're only a couple of months away from the Fourth Annual Artful August. 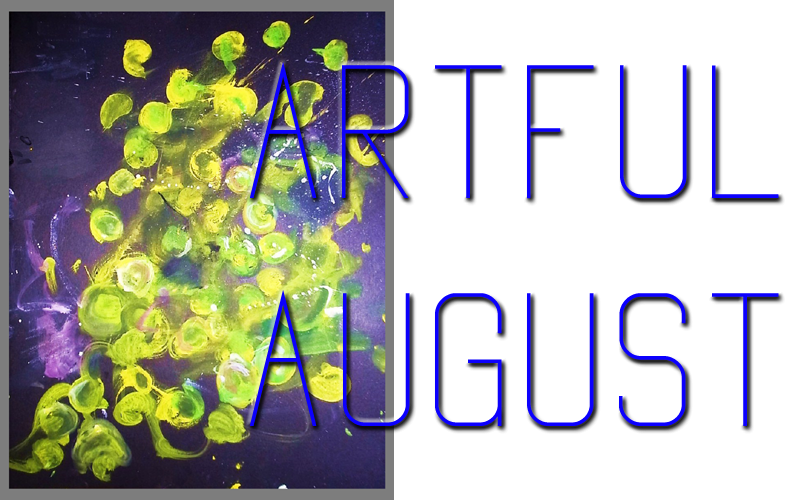 Too hot outside? Allergies and bugs getting you down? Artful August will be here in less than two months, so stay indoors and make art! Last year we got an early jump on it and it really paid off with some incredible entries. As a reminder, we're looking for original artwork, and we will be looking for both beginner and advanced artwork as well as digital and hand-drawn entries. As long as your art stays in the realm of appropriateness, we want to see it!

DrakeGladis has been walking the halls of Cardsmith for a while now and has been heavily involved in both the Colonisers and Tournament of Champions Sagas. We're always excited to see new cards from DrakeGladis, and we think you will be too. Here are five just to whet your appetite! 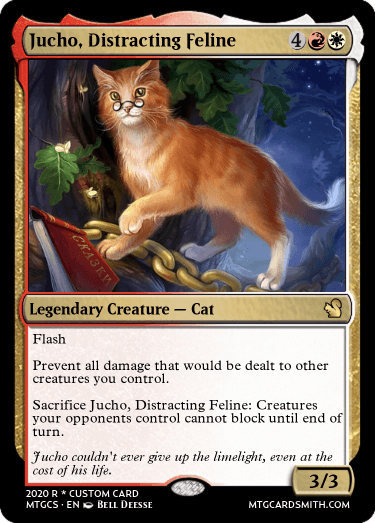 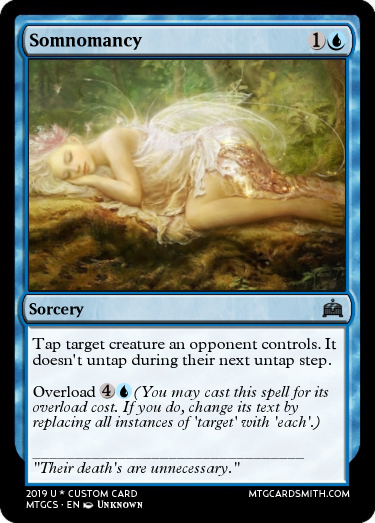 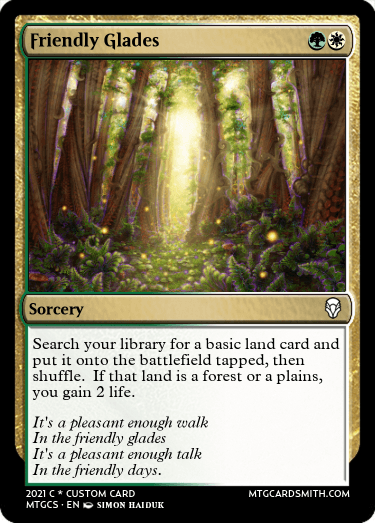 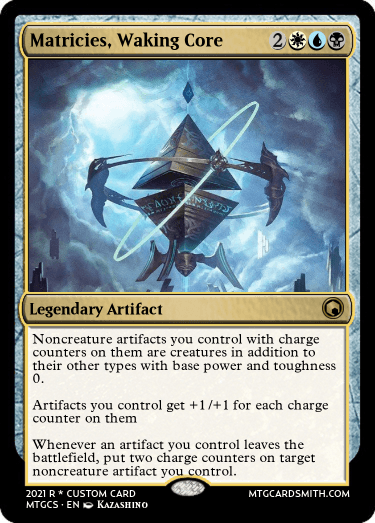 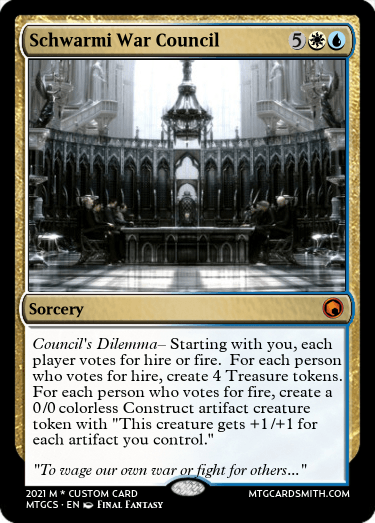 Ral1000 is our second Featured Cardsmith for the Month of June. Even though Ral1000 has recently decided to leave Cardsmith, we still wanted to showcase the work he did while he was here, and send him off with this small showcase! Please enjoy these five cards and feel free to favorite more of Ral1000's cards! 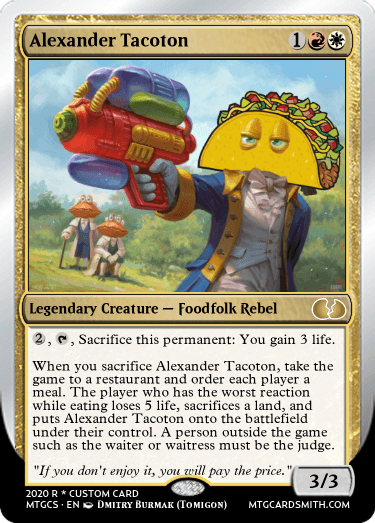 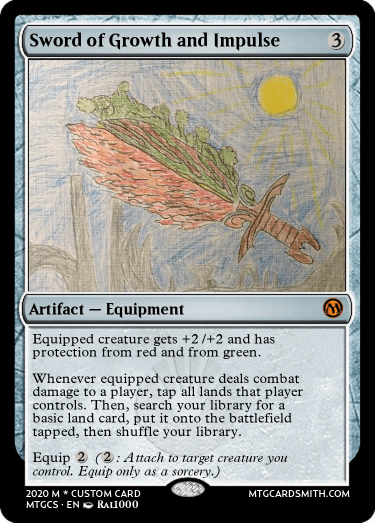 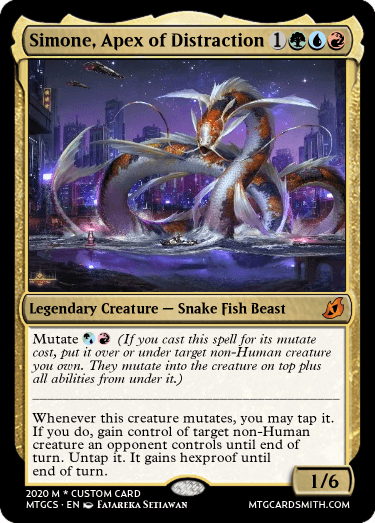 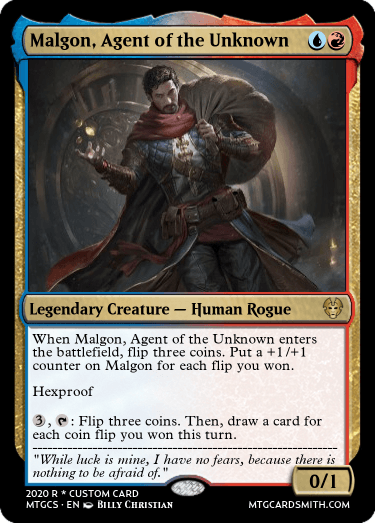 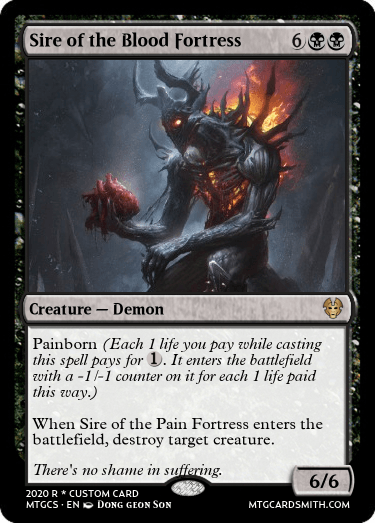