Since 2011, MTG Cardsmith has grown from a simple idea into a thriving custom card community with over 80,000 members, creating over 25,000 cards each month! As the creator and founder it has been my pleasure and privilege to serve the community for nearly 9 years, adding new features, hosting amazing contests, and joining the community in shared moments. Today marks a major step in the MTG Cardsmith journey - a new team with additional resources is stepping up to continue building and expanding the site! Some of you may have already met Ian_The_Guru, the new admin for the site and the forums. Welcome Ian!

In preparation, we will be taking the site offline for a few hours over the next couple of days in order to perform some final server maintenance. Thank you for your patience at this time.

As for myself, I'm moving over to focus on my professional and family life, but will remain a community member of the site. I look forward to watching what the new group does with the site and know they have some interesting things in store ahead. Thank you all for joining me on the journey so far, it's been a pleasure and a gift.

March roars in like a lion. So fierce, The wind so cold, It seems to pierce.

The month rolls on And Spring draws near, And March goes out Like a lamb so dear.

Will You Roar or Will You Bleat?

March is synonymous with Lions and Lambs, thanks in large part to Lorie Hill's poem. Because of that, we're going to be on the lookout for your best Beast, Cat and Sheep inspired cards! Show us your creative creations for a chance to get a Feature!

spookoops is the first of our two Featured Cardsmiths this month. spookoops is one of many Cardsmiths who hail from Japan, and this month we hope you'll take a peek at some of the fantastic cards this Cardsmith has crafted since joining us in 2018! We posted five below so you could check them out!

Although you can't look at his oldest card and tell, CnBCustoms has been cardsmithing for a very long time, even before myself and Tomigon! He has been quietly making cards for years and we wanted to say thanks by giving him one of this month's Featured Cardsmith spots! Here are five cards to give you a feel for some of the cards CnBCustoms has been crafting. Give them a look!

A brutal warlord burns the countryside, leaving not even a single survivor to tell the tale of their destruction. A scheming advisor quietly laces a cup with poison, passing it off to a servant he's already paid off. A powerful judge of the high court sentences all before him to death, their pleas of rightful innocence fall on deaf ears. A grizzled outlander gathers the ancient and angry magic of the forest to topple the gleaming towers of a city, regardless of the lives existing within.

Take those images, and translate them into magic terms. In order, if I did my job right, you should see Red, Blue, White, and Green. Today I'd like to talk to you all about a really stupid bias that Magic seems to have about Black.

Throughout Magic history, black has always been the color of villains. Most Black aligned characters end up villains. For context, let's break it down by the numbers. Out of all legendary creatures and planeswalkers ever printed, here are the number of each that are villains. (Multicolor count for each color) (Characters with uncertain standing/stories not counted)

Look at these numbers, it's not even close! Black has almost 100 villains among their printed legendary cards. Next, let's look at the Color Pie, specifically one supplied by Wizards themselves during the You Make the Card Event back in 2013. 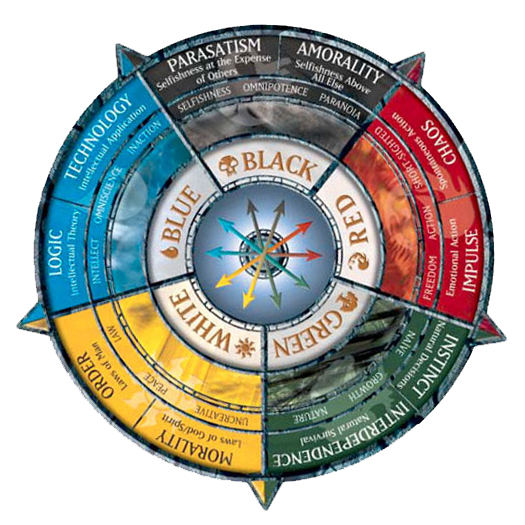 This is genuinely a ridiculous wheel to me. Given, it is a little outdated, but I think this is still how most people see the colors. Black should not be the inherent "evil" color because let's face it, that's not what the cards represent functionally or flavorfully. Evil is subjective, Black doesn't do anything inherently evil, it just wants to win at any cost. This can be framed so many ways instead of as a villain! Imagine a roguish thief sacrificing themself to save their friends and to defeat the true villain. Winning at any cost, including the self. An inherently Black trait shown by cards that let you pay life!

And, just for gravy, villains would be way more interesting if they came in all colors. As I attempted to show at the start of the article, all the other colors have villainous traits within them.

White cares only about the good of the many, it sees the laws as absolute and unbending.

Blue is logical, it doesn't see emotions or personal conflicts as important.

Red is chaotic and destructive, the consequences of its actions don't matter as long as it's having fun

Green wants to reclaim society. Tearing down all facets of civilization without caring about casualties.

I implore you all, as people creating cards of our own, branch out with your antagonists. Black is fine to include, I'm not saying don't, but maybe think about how to make monocolor villains in the other colors. Or hey, maybe even try making a Black-aligned hero once in a while.

That's all for this month, let me know what you think about the color pie and it's characters in the comments below. You can find me on twitter @East2Westmtg or email me at East2westmtg@gmail.com. As always this has been East2west with CCC, I'll see you guys on the battlefield.

January 25th, 2020 marked the start of the Lunar New Year! This year's zodiac animal is the Rat, and as you may have guessed, it's also our Theme of the Month for February! This month we'd like to see you make some of your best Rat and Mouse cards. And as always, we will pick some of our favorites to showcase as MTGCardsmith Features!

Of course that's not all! Right now you can choose the newest Cardsmith Avatar, made by our own Faiths_Guide to help you celebrate the Year of the Rat!! That's right, this year you don't need to enter to get the Avatar. We loved it so much, we wanted to make sure everyone could enjoy it! Happy Year of the Rat everyone!

Our first Cardsmith for February, AlexWright has crafted nearly 500 cards and doled out more than twice that amount of favorites! We really like his cards because they're fun and full of unique ideas! Take a few minutes of your day to check out what this Featured Cardsmith has created!

He's a self proclaimed "Azorius to the Core" Cardsmith, but we think his other cards are pretty good too, and that's one reason why we wanted to showcase KalamMekhar as our second Featured Cardsmith for February! We only picked five cards to showcase here, but trust us when we say there is much more to see over on his page, so when you've fnished checking out our first Cardsmith of the month go check out more from KalamMekhar!

Hello everyone, East2West here with the most tepid take ever. White isn't bad, R&D just doesn't know how to define the color anymore. This month, I'd like to ring in 2020 by going over the most overlooked and put down color in magic. We'll be looking at White's history in the game and what can be done to differentiate it from the other colors. So sleeve up those Plains and prepare yourself to cast 2/1's for one White mana, let's get into it!

First off, let's talk about Whites place in the history of the game so we have a historical starting point for our analysis. Ever since Alpha, White has been a jack of all trades to the color pie. While each other color has specific things that it does better than the others (Card draw, direct damage, removal, ramping, etc) the closest thing White ever had to that was damage prevention something that, unlike the others, has fallen out of favor. Other than that, White has sort of struggled to have an individual identity. It's able to do almost everything the other colors can, but it just doesn't do them as well. Historically we also see things that are traditionally White divvied up among the other colors. Examples of this include life gain, +1/+1 counters, and tokens being taken by green and flicker abilities being taken by blue.

So what does White have left that is unique? Really only one thing has stayed primarily and that would be exile effects that target permanents still on the battlefield. According to scryfall there are around 320 cards that refer to exiling cards from the battlefield (Not including flicker effects). Of that, around 140 of them are white, that's well over half. This shows that white is seen as the primary color for on board exile effects. For anyone interested in the exact breakdown by color, here it is. I counted multicolor cards for both colors

We see here that exiling from the battlefield is an overwhelmingly white ability, and something that we can all admit is really powerful! Exiling a problematic permanent not only gets rid of it in the moment, but makes it infinitely harder to get back for reanimator decks. So now that we've identified exile as an ability unique to White, where do we take that design space? To answer that question, let's look at what wizards has already done to help us out.

Warden of the Beyond is one of the most unique cards in Magic, as far as I could tell it's the only card in the game that has an effect like this. But what if that wasn't true? I propose that White could very easily pivot into being a color that makes use of the exile abilities like Black takes advantage of the graveyard. The flavor here is on point too, exile is used to represent prison or some sort of capture, therefore the color of law and order would be adept at using such things. Imagine cards that get powered up if a player has cards in exile. What if you could cast certain cards from exile for a bonus effect, or maybe even exile the card for a bonus effect. There are endless ways to go from here, and I hope to see what you all do with it!

So there you have it, let's make White something we can all be proud of. Let me know what you think of the color and what could be done with it in the comments below. You can find me on twitter @East2Westmtg or email me at East2westmtg@gmail.com. As always this has been East2west with CCC, I'll see you guys on the battlefield.